1922 Lab Explosion with Clues for Today 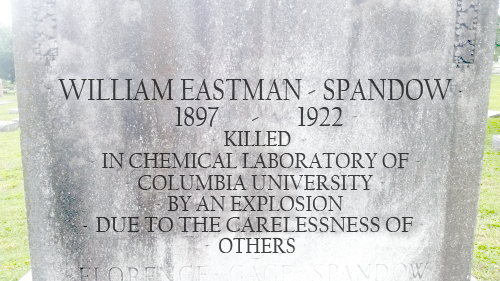 “The funeral of William Eastman Spandow . . . will be held in the Chapel at 11 o’clock this morning.” This was the introduction of the obituary given by the Columbia Spectator in 1922 on the unusual death of a 24-year-old chemist. The obituary describes a shocking lack of lab safety standards at Columbia University at the time. “Many eyes, fingers, and hands have been lost in such laboratories because the educational institutions… have not yet become as thoroughly convinced… that it is possible to prevent almost every type of industrial accident by the installation of proper mechanical guards, by the revision of manufacturing processes and by safety education of the workers.”

The article notes Spandow’s “unusual attainments,” having a Bachelor’s and Master’s degree in both chemistry and physics. Unfortunately, the life of this brilliant young scientist was cut short too early. On November 17, 1922 he was experimenting with the manufacture of diphenylamine. The chemical became over-pressurized and shattered the heavy steel autoclave it was placed in. Pieces of metal went everywhere, wounding other chemists and killing Spandow instantly. The explosion was powerful enough to shatter the windows.

Spandow is buried in Elmwood Cemetery in Memphis, Tennessee. His inscription reads “Killed in chemical laboratory of Columbia University by an explosion due to the carelessness of others.” It seems that the Columbia Spectator, along with whoever wrote the inscription, took issue with Columbia University’s poor lab safety standards at the time.